There were about a dozen titles during the Blue Moon era! 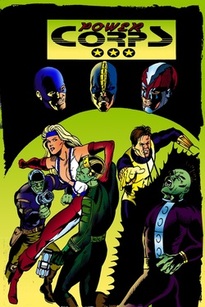 Posted: Wednesday, May 2
By: Paul Dale Roberts
Print This Item

Here's a message from Patricia Mary Roberts aka Jazma Girl: "I used to love my Archie comics when I was a little girl and really never got too much into the superhero genre, but I must admit Blue Moon Comics is a funfest that is full of exciting thrills!" Now back to Paul.

Lloyd 'Commissioner' Smith, Power Corps #2 was just as adventurous as the first issue. As our heroes battle for their lives against a monster known as the legendary Din-Tan-Doom who is as gigantic as Godzilla [albeit maybe a little derivative of Marvel's Fin-Fang-Foom monster]! The alien race known as the K'remll is a major threat to the Power Corps and I couldn't wait to get through this issue to see what extradimensional demon they were trying to place upon our plane of existence!

As for the monster that our heroes were fighting, it's amazing on how this creature was able to alter its density and a log thrown through its heart passes right through and the creature is unscathed [think the Vision in monster form and you get the idea]. What madness is this? Godzilla himself pales in comparison to this beast! Not to give too much away, this exciting comic is jam packed filled with one catastrophic blow after another and if that wasn't enough we have in the very next issue: Xenos v. the Dark One; The Power Corps v. the K'remll, Sgt Freedom v. The Hornet! Like Stan Lee would say...'nuff said!

Now in this power action comic we also have The Black Rose - The Secret of the Topaz Tiara! The Black Rose is a cross between Sci Fi Channel's Black Scorpion and Marvel's Black Widow. Loved her outfit and I love those fishnet stockings! In this murder mystery our heroine gets framed, but this lady of action who rides a motorcycle like a Hell's Angel pro knows how to get through these times of trouble. When she takes on the mob, she does it with style and class! This truly had a climatic ending!

Here we go again, 3 great stories. Blue Moon Superheroes #3 moved like the Orient Express during rush hour! My half-brother Andres Somprise Soyo in Manchester, New Hampshire is an admirer of great comic book artwork and I scanned a few pages of Steve Addlesee's artwork and zapped it to him by email, he said he was very impressed with the smoothness that Steve uses on his penciling. Also, that Steve has a great touch with shadows. I must agree.

With the first Steve Addlesee story 'Uncompromising Vigilance' it was a blend of Miami Vice meets Hill Street Blues. You have a very cool cop named Tanner on the mean streets of the city. Tanner could take the whole show in this story, but then here comes Incarcerator 2, a no-holds-barred vigilante. If you want action, it's all here in the powerful story. Wrestling fans will definitely love Incarcerator 2, I know I did!

'No Borders' can be summed up with one word. Magnificent! Move out of the way Charlie's Angels, because we have some very hot vigilante superheroine ladies in this story! Their motto...'infiltrate, investigate and incarcerate!' Need I say more? If you like tension, then there is always that mysterious group who opposes oppressive immigration laws. Make mine Rogue and Hope...just too hot too trot!

Now to Zack 'Mercury' Michaels. Superb story as we delve into Zack's off times with his pals who just finish up with a horror movie. Things seem normal for a little a while, but I pity the fool as they come across no other than Nowhere Man. The fight scene between Mercury and Nowhere Man was done with high intensity!

Blue Moon Superheroes #3 is top-notch all the way!

Also, http://www.sfreader .com/sa_100802. asp includes the text "Blue Moon Comics has found its niche in publishing digest-sized comic books like Blue Moon Superheroes, the Vault of Shadows, and All Smash Funnies. Publisher Lloyd Smith releases comic books that recapture the spirit of titles from the Silver Age of comic books, the 1950s and '60s. Information on Ever Green and how the two issues may be ordered is available at http://bluemooncomi cs.tsx.org."  Unfortunately, that link appears to be dead.

This post is entirely off-topic, for which I appologize.

However, I've been trying to unearth, completely without success, any information, including publishing info, dates they were published, how long they lasted, who published them, how many individual comic books there were, etc,etc..... for 'Blue Moon Superheroes' , these scans of which I found on the internet more than a few years ago.

I'm very, very intrigued by them, and I'd love to acquire some. Are they American? I'd also like to see more cover scans of these. If there are more.

The covers intrigued me, and I've been totally unsuccessful at finding any of them since I began looking for them some years ago.

I still know absolutely nothing about them.

Can any folks on these lists who know about these, give me some info on these? I am also wondering if only the three issues were released, if various titles came out of this shop, etc.

Do they have colour or black and white interiors?

I'd sure appreciate any help anyone can give me on this.

BLUE MOON publisher Lloyd Smith has announced that BLUE MOON COMICS will
be undergoing a huge change in format and pricing in an effort to make his
company's comics more accessible to the public. "Comics fans want to try
new things, but as we all know, money's tight. While I love our huge
magazine format, I realize that it's far too pricey for the average
fan--even one who is interested in giving new/small companies a shot. The
solution is this: change formats, lower the price. And that's what we're
going to do." The new format will be 32 page "digest size" comics with
cardstock color covers for $1.75 (+ twenty five cents postage). Each title
will contain at least 23 pages of comics, plus news, ads, and other
surprises. "Fans will definitely get their money's worth--and then some,"
Smith promises.
The first wave of new BLUE MOON titles will start the second week of
January: BLUE MOON SPOTLIGHT (featuring Wasteworld) #1-a done-in-one
premiere for a possible ongoing science fantasy series by publisher Smith
and artist Jamie Laurie, with a "Silver Age" homage back-up, ALEX MIRACLE by
Smith and "Renegades of Justice" artist Ernest Edwards; POWER CORPS #1-a new
team of superheroes, again by the team of publisher Smith and New Zealander
Jamie Laurie; and VAULT OF SHADOWS #1-a mystery/horror/fantasy anthology
starring KRAGOR by Smith and "Violent Lifestyle" artist JP Dupras, "Champion
of Light/Champion of Darkness" (a horror/mystery story featuring
wrestlers!)by BIG BANG contributor Ed Quinby, along with Finnish artist Juha
Vourma's "The Bird" and another short feature.
In February, BLUE MOON will release INFINITE TALES, Vol. 2, #1 with
regular features ULTIMUS (by Smith and Dupras) and CONTROL ZERO by Shotgun
Press's Troy Brownfield and Digital Dragon creator Bryan Heyboer (along with
back-ups that include work by pros like Dick Ayers and Dave A. Law); BLUE
MOON SUPERHEROES starring MERCURY by Smith, Sherlock Holmes artist Seppo
Makinen and award-winning inker Steve Addlesee, along with Addlesee's own
creation: wrestler-turned-superhero INCARCERATOR #2, with pencils by Diego
Jourdan Studios, and other short features; and a third title--an adventure
anthology that will feature pirates, western, war, and other high-adventure
strips.
BLUE MOON will be offering "across-the-line" ads in their titles at
affordable rates ranging from $25 to $35 dollars for full page ads. For
advertising information, write the publisher: Lloyd Smith/HC 66 Box
1448/Barbourville, KY 40906.
All of BLUE MOON's titles will be bi-monthly at $1.75 (+25 cents for
postage)each from BLUE MOON COMICS/HC 66 Box 1448/Barbourville, KY 40906.
Blue Moon's titles can be also be ordered through their website at:
http://bluemooncomics.tsx.org
Publisher Smith added, "We at BLUE MOON have an undyling love for comics,
and it shows in every page we produce. We hope fandom will give us a look.
We're sure to please!"
_________________________________________________________________