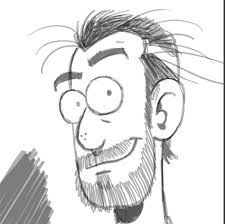 JMH: Tell us a bit about Frozen Light Comics. What are its origins?

ANDRE:  It's what I hope will grow and become known as a "good" company; a company known for it's good quality of products more than it's bottom line or sales figures. I kind of view today's comics industry like pop stars of the day. If you have to use gimmicks or sex and violence and gore, instead of ideas, stories, characters and art, then you're probably trying to hide the fact that your product really isn't that good.  When I was a kid, comics were fun to read. For all ages.  Not just kids or adult fans.  Nowadays, it seems the entire industry is focused on selling crap to adult fans and are shocked that sell and readership drops every year, unless they try to reboot their entire line of books and universes.  It's just the prevalent corporate mentality at work. Short term profit at the cost of long term growth. It's a very short-sighted way of doing business.  Let them do it, I say.  If enough comic-book readers get tired of the big companies' gimmickery, maybe I'll luck out and get more readers!  LOL  So, yeah. Frozen Light Comics is a different option to what's being served to fans. Same genres of stories people enjoy, but without the shitty gimmicks.

Frozen Light Comics started, in my mind at least, when I was a young kid full of idealistic dreams.  It was the company I dreamed of owning and running for making comics, movies, cartoons, etc.  And recently, I decided to do what first got me drawing: Comics.  It only made sense I call my company Frozen Light Comics.

JMH: What sets Frozen Light Comics apart from all other Publishers?

ANDRE:  First, I'd have to say all the comics, so far, are all "all ages". And that doesn't mean "kiddie comics", or childish stories and art only suitable for the pre-school crowd.  It simply means that literally anyone and everyone can read and enjoy Frozen Light Comics... and be entertained by them. Just like comics used to be done for almost a century. DC, MARVEL, CHARLTON, & other comics companies, were built on all ages comics. ALL of todays favorite characters were created in and for all ages comics.  This is what Frozen Light Comics is all about: COMICS FOR EVERYONE, not just for die-hard, adult comic-book fans. They're for everyone to enjoy.

JMH: Tell us a bit about your flagship title, Northern Adventure Quarterly.

ANDRE:  My baby! LOL  As a kid I used to love DC Comics' 100 page Super-Spectacular comics. They had a new story, and reprinted stories from the companie's golden age and silver age. They were great. That's how I discovered the history of the comics medium. And all those characters. They were awesome!  I always wanted to do something like that with a comic-book.  Not an anthology, as such, but a 100 page Super-Spectacular!  Granted Northern Adventure Quarterly doesn't have 100 pages and only contains original stories, but hopefully the fun of many characters and stories in one comic-book will be appealing and fun to new and old readers alike.

JMH: What made you lead with Northern Adventure Quarterly as opposed to any of the other titles you’ve announced?

ANDRE:  It was the one that was ready before the others.  I had been developing characters, stories, etc, for quite some time. Growing up, I was an avid reader and fan of Captain Canuck and Alpha Flight and always wanted to do my own Canadian super-hero stories.  As you can see I had lots of characters just sitting idle in my files, waiting for stories, or, in some cases, waiting for me to finish writing their stories.  Northern Adventure Quarterly just got finished first.  I'm glad it came first, actually.  Kind of like waving the flag proudly. LOL

JMH: Can you give us a sneak peek into one of your other titles?

ANDRE:  There are quite a few coming up!  But the only one I can talk about, without revealing too much, is Lady Black.  That's the second title from Frozen Light Comics.  Aside from comic-books, I've always been a fan of the old pulp novel heroes like Doc Savage, The Shadow, The Avenger, etc. Lady Black is kind of my salute to them and the earliest comics super-heroes that they inspired like Mandrake the Magician, The Phantom, Superman, etc.  Back when the "super" heroes of the day were more like actual detectives and protectors of the people rather than god-like steroid abusers who just beat the crap out of each other at the drop of a hat.  Lady Black is going to be lots of fun!  It's such a blast to write and draw that book.  I really hope poeple give it a shot. I think readers will really enjoy the story and characters, and all the easter eggs I'm putting thoughout the thing.

JMH: Who is The Guard?

ANDRE:  He's the worlds greatest protector, that's who! LOL  The Guard has been around over a thousand years, protecting the world and it's inhabitants for destruction. He's me, he's you, he's everyone, young and old, male or female.  I know that sounds vague and weird. I'd explain but if I did, I'd be giving away far too much of the upcoming issues in the story.  Suffice to say, the GUARD that readers met in Northern Adventure Quarterly #1 is a young guy, new to the job of being a super-powered hero. He's still not quite certain how to do things or even what to do. It's as much a path of discovery for him as it is for the reader.  Why is my way of saying KEEP READING!!  LOL

ANDRE:  Zodiac has been creating alot of interest in readers so far. I hoped he would, of course, but I always thought The Guard or Miss M would grab more attention.  Seems the Guard and Zodiac are the two most popular from the first issue.  As his name implies, Zodiac derives his powers from the Astrological symbols of the zodiac. So that makes his twelve super-heroes in one!  And each one of those twelve heroes has his or her own name, powers, and underlying personality. More of which will be explored and revealed in upcoming stories.

JMH: How are your books going to be released? Print, digital, or both? Why?

ANDRE:  BOTH.  There is a demand for both digital AND printed comics.  I would be a fool to exclude either option when there's demand for them.  Granted, right now, the digital version of the comics are outselling the printed ones. Which isn't surprising taking into account Frozen Light Comics, Northern Adventure Quarterly, and myself, are all "unknown entities" in the comic-book circles.  Hopefully everything will even out with time, as more people discover what Frozen Light Comics has to offer.

JMH: Who are some of the talent Frozen Light Comics is bringing to readers in the future?

ANDRE:  Aside from yourself, there are a few.  But it's much, much too early to name names. I wouldn't want to jinx anything before it's all locked in, and in place.  Actually, it's very hard to find writers and artists.  Obviously, there are tons of both out there, some with experience, some without. I mean they're hard to find, because I'm just so picky and very demanding.  If I kill myself to attain a certain quality level, I'm only interested in like-minded people who are willing to do the same, to reach the same level or better.

JMH: When does Lady Black hit the streets and where can readers go to get their copy?

ANDRE:  Lady Black will be making her grand entrance in Late November/early December 2012 same day digital & print comics on the website.  I'm very excited to see the reaction from readers.

JMH: Anything else you'd like to mention that we haven't covered yet?

ANDRE:  I'll soon be back to work on Northern Adventure Quarterly #2 - due out in March 2013, then onto issue #2 of Lady Black due out shortly after, with more titles coming soon too. The third series is going to be a huge blast!  I can't wait to tell people about it!!!  *sigh* Guess some thing will have to keep till later.