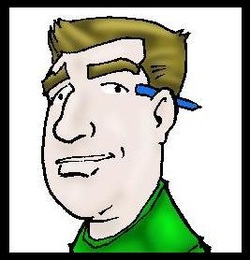 Andrew Clark's name was passed on to Hal Hilden from the super-duper Jen Lambe, who is the Chair and Director of Guest Relations, Advertising, Sponsorship & Partnerships, Contracts, or anything else, at Hal-Con. Hal was looking for a local artist, and Andrew immediately came on board and quickly produced pages for Ministers of Magic for Red Leaf. His pencils are tight and clean, reminiscent of some early Image material. Andrew is currently penciling a LEAF story, and co-writing another LEAF story. Besides freelancing with Red Leaf, Andrew continues to provide the writing and art for his creator-owned project called Slice Fate [http://www.slicefate.com/wordpress/]. Canadian Hal Hidden spent some time with Andrew recently...


Hal: Where were you born and raised?

Hal: How did you break into the industry?

AC: Still trying to. It's not easy. The real question is "How long did it take to decide to try and break into the industry?" The answer to that is about 25ish years.

Hal: Tell us about Slice Fate?

AC: Where do I start? Slice Fate centers around a man named Raghnall Livingstone who basically falls down a rabbit hole and becomes a super hero named Slice. This happens to him during the 1100's. One part of his powers is a sort of immortality (I say "sort of" because its not immortality in the traditional sense of the word and its something that will be explained the current issue) so his story ends in the year 3523. A basic time line of his life is shown in the four issue min-series (http://www.slicefate.com/wordpress/?page_id=338 ) but is being fleshed out in the ongoing series. He's made a hero pretty much by accented and then for 200 hundred years he's left to fend for himself trying to make sense of what has happened to him. We're about to learn a lot about Slice and the responsibility that burdens him over the next few issues.

Hal: When are you finally going to let Slice Fate be published through Red Leaf? I have been asking Andrew this for over a year now btw....

AC: Part of my issue of having Slice printed at all is that so far Slice has been a learning experience and even though I am very proud of what I have achieved over the last four years I would really like to update some of the scanning and lettering etc... at that point I'm thinking of publishing via IDW, I'm sure they'll go for it.

Hal: Do you have a favorite genre that you like to create art for and if so, what is it?

AC: I read a little bit of everything though I don't seem to be into the Marvel or DC stuff these days. Matter of fact the only Super Hero books I'm reading are "Invincible" (Image) and "The Boys" (Dynamite). My biggest enjoyment comes from "Locke and Key" the "Parker" books (IDW). With that said, I think I would love to do a series of comics based on the James Bond world, combining both the literary and cinematic franchises.

Hal: Do you have something that no matter what, you never seem to be able to draw it to your liking?

AC: I find with me it has more to do with how much time I'm willing to spend on something rather then what it is. Buildings for instance, I can do them but they take forever and I have the attention span of a two year old hyped up on energy drinks.

Hal: Do you have any formal art classes? Have you taken any classes or courses?

Hal: Who are your artistic influences?

AC: I grew up in the 80's and 90's and was really into the G.I.Joe stuff and then later on when I got into comics I loved anything MacFarlane, Jim Lee, Marc Silvestri. As much as people sort of trash talk that era of comics this guys were (and still are) super stars to me. Oh and I cant forget Dale Keown on the Hulk series.

Hal: How do you focus when penciling? Do you ever suffer from the artist's version of writer's block, and if so, how to you deal with it?

AC:I don't have artists block like I used to. Sometimes I'll take pictures of myself or wife to use as a reference. I listen to CBC radio one, music, a few pod-casts, whatever I need to entertain my mind for 8-9 hours it takes to do a page.

Hal: What was the first comic book you ever read?

AC: I don't remember the issue number but it would have been a G.I.Joe book. However, the first comic I read that was not a Joe book was The Incredible Hulk issue number #378.

Hal: Do you read any of the new comic books that are being published today? If so, which ones?

AC: As mentioned before, Invincible and Locke and Key. Also The Strain, The Unwritten, The Boys, Parker. I get to read a lot of Dark Horse and Valiant as I get copies sent to me for a podcast I do over at Verbalbrew.com

Hal: Name a few characters or franchises that you'd love to write for if given the opportunity?

AC: I don't think I'm the best writer in the world but I have a few ideas that I would love to be the producer on and get some real talent behind them.

Hal: [update] I am proud to announce that Andrew and I will be co-writing a new/old character for Red Leaf Comics. It may be the autumn of the Leaf......

Hal: Name a few fellow creators that you would love to work with?

AC: I don't have any people that I would like to work with per say, I would love to have someone who would do everything for me after the penciling part. I don't have anyone in mind just so long as they do their jobs and leave me alone!

Hal: I was so waiting for you to say Hal Hilden. In fact, I almost added it into your answer. Yeah, I'm that shallow.....

Hal: Print vs. Digital. Your thoughts…

AC: I think that digital is the way of the future even though I'm not the biggest fan of it. I would rather sit with a book in hand and turn the pages as I read it. However, I think the business model for Digital comics is one that can not be ignored and will only become stronger as more people have hand held devises that cater to the digital format.

The only thing that print has going for it is that the people who tend to buy comics also love to collect things and show them off to their friends. This is a big thing that can not be ignored.

Hal: What other mediums or genres have you created art for?

AC: I work for a local company creating and building mascots and props for film and stage called Ray of Halifax.

Hal: I did not even know that about you, and I'm your artistic partner!!!

Hal: What are you working on right now, and in the future?

AC: I continue to work on Slice of Fate and will be doing an eight page story for Hal. There is also a co-writing a small 6 pager that Im writing and doing the illustrations for a company out of the UK (that's the goal anyways).

Hal:  [update] A new comic is now in development and it came from a design sketch by Andrew Clark that floored EIC and Red LEAF guru John Helmer. Andrew is going to co-write it [but it is my hope to sweet-talk him into penciling it as well....hehehe].

Hal: I know for a fact that you attended Hal-Con [www.hal-con.com] last year. Tell our readers what the experience was like and what did you take away from it?

AC: It was horrible! I met the worst people ever. I'm kidding of course. It was a very educational experience for me and a I did meet some cool people. Besides Hal, whom I had never met face to face up to that point, I got to meet Darwyn Cooke, Steve McNiven, John Rhys Davies, and the extremely friendly duo Nick Bradshaw and Danica Brine.

It was an eye opener for me and I got some great ideas on what direction I would like to take my art.

AC: Neither, I have no loyalties to any team though I use Vancouver in my season of NHL '12 and like to attend the odd Mooseheads [Halifax's QMJHL team] game.

Hal: Well, at least you didn't say Montreal, so that's good. Andrew, as always it was a pleasure doing this, and I look forward to co-writing and co-creating projects with you. And you may not be getting the $$$ that a professional gets, but you are a total professional in my books. Thanks big guy....