Anthony Ormond is an award nominated author whose book Tommy Parker showcases action and adventure in the world of young adult mystery. Anthony recently talked with CBI publisher John Michael Helmer about Tommy Parker, what makes the book so special, and his future plans...
JMH: What is Tommy Parker?

AO: Tommy Parker is the central character in the award-nominated, time-travel adventure Tommy Parker: Destiny Will Find You! The story chronicles the adventures of our 12 year old hero and his group of friends.

When Tommy Parker packs his bags and goes to his Grandpa's house for the summer holidays he doesn't realize that his life is about to change forever. But that's exactly what happens when Grandpa lets Tommy in on a fantastic secret: he has a magical pen that allows him to travel through his memories and alter the past. A pen that can change history! The Pen of Destiny.

Tommy finds himself having to embark upon a dangerous adventure where he and his friends have to guard the Pen from a deadly cult, fend off monsters and avoid booby traps, and are quickly introduced to a world where reality and the magic of one’s memories merge into one.

Tommy Parker is a fun tale of friendship and bravery, an exhilarating adventure that redefines the time-travel genre.

You'll never look at your memories in the same way again...

JMH: Can you describe the world/universe he’s from?

AO: Tommy Parker lives in a sleepy little town called Little Millbrook and his adventures takes him across all of its landmarks both pleasant (Grandpa's house) and scary (his haunted school!). That isn't to say, of course, that he's travelling about purely in a geographical sense - he's moving about through time and memory too! Well, he wouldn't be much of a time-traveler otherwise!

Tommy's journey takes him and his friends through the world of memories (where nothing is quite as it seems) even taking them to the dangerous setting of World War Two where, amongst other horrors, they have to avoid getting eaten by a ferocious T-rex. Yep! They're certainly up against it.

Tommy's universe, whilst offering plenty of historical fact and interest, is best described as 'historically approximate' rather than 'historically accurate'. (For instance, I bet you didn't know that Guy Fawkes actually succeeded with his plot the first time round...)

JMH: Does Tommy Parker have supporting characters and if so can you tell CBI about them?

AO: Tommy Parker is surrounded by loyal friends and family.

He has a loving relationship with his Grandpa and his two brave friends, the clumsy Ben and the brain-box Art, won't leave his side, even at the darkest of times. Add to that the wisdom of Tommy's mentor, the mysterious Mr Wiseman, and the cool head and beauty of Tommy's school crush, Jennifer, they are a force to be reckoned with. But a strong team is exactly what Tommy needs as he has to contend with such day to day things as the school bully, Savage, and the less so day to day things as the ancient and deadly cult known as Secuutus Pluma, who will stop at nothing to take the Pen of Destiny from him.

Secuutus Pluma is headed by the most dangerous and frightening man to ever walk the earth - Nidas, who has somehow discovered a way of unleashing The Creperum on the world: an evil entity that brings to life all of mankind's darkest memories, conjuring
every nightmare or bad thought one has ever had, into physical form. Scary.


JMH: Was Tommy Parker inspired by anything from your past or real life experiences?

AO: I would say that the first half of Tommy Parker is very much autobiographical, giving me the chance to share some of my own childhood memories. However, when the magic happens, when Tommy starts travelling through time and fighting skilled assassins, I must confess that that's where the fiction takes over. (I have been chased by a real life dinosaur though).

I tried to recreate the atmosphere of adventure stories that wowed me as a youngster. Back to the Future is certainly a big influence, as is the close nit friendship of the characters in The Goonies. If you like those two classics then you won't go far wrong with Tommy Parker.

AO: The importance of family, friendship and loyalty. That creating happy memories with those closest to us must never be taken for granted.

Also, on a personal note as the author of the book, as George McFly famously said "If you put your mind to it, you can accomplish anything".


JMH: Will Tommy Parker be released in digital format, web comic, or print?

AO: Tommy Parker is available in paperback and on Kindle.

JMH: Where can fans get a hold of Tommy Parker?

AO: From all good online retailers such as Amazon, Waterstones and The Book Depository. It's also available directly from the publishers, Candy Jar Books.

AO: They can find me on Facebook, either by searching my name or the book title.

JMH: Finally, is there anything coming up in further Tommy Parker stories, or other projects you want people to know about?

AO: I'm currently working on the follow-up to Tommy Parker: Destiny Will Find You! hopefully to be completed and on shelves within the next 12 months.

I'm really enjoying taking Tommy and his friends on yet another exciting adventure.

If you're brave enough, why not join us?

JMH: Anthony, thank you for your time. All the best! 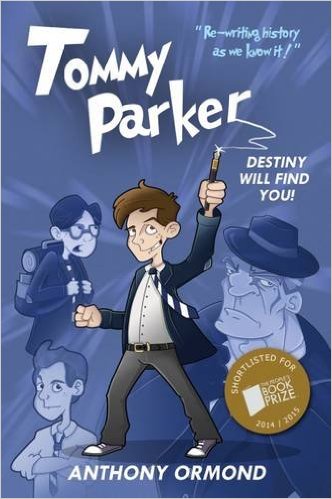