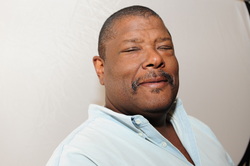 GARY: I was born and raised deep in the wilds of infamous South Central Los Angeles many moons ago.

JMH: Tell CBI about yourself.

GARY: I have had various sorts of jobs from community organizer, delivering dog cages, executive director of nonprofits, worked on political campaigns to that of printer – and am old enough to having learned to set hot type, that is metal type, backward in a California job case so as to pull a print right-reading on a sheet of paper.  Talk about ancient.  I showed a sheet of carbon paper to my kids once, who are now in their twenties, when they were small and I might as well have been showing them a page of Sanskrit.

I’m primarily a prose mystery and crime writer but have loved comics since I was a kid.  I’ve also edited prose anthologies such as Orange County Noir and co-edited Black Pulp.  In comics I’ve done work for Boom! Studios, Dark Horse, Vertigo, Oni and Moonstone – for whom I’ve done comics and prose short stories in the Green Hornet Casefiles (a riff on the blaxploitation classic Detroit 9000) and The Spider: Extreme Prejudice (the first ever in prose uneasy alliance between the Master of Men and the original super spy, Operator 5) anthologies.  Currently I’m the veep of content and editorial for an ebook outfit doing hardboiled, action-adventure pulpish novellas, Stark Raving Group.

JMH: Have you had any formal training in writing?

GARY: I’ve had no formal training in writing other than taking an extension class once.  My life experiences have helped to inform my work.  Reading is what writers should do.  And rewriting, always rewriting.

JMH: Who are your writing influences?

JMH: How did you break into writing comic books?

GARY: I’ve yet to write for Marvel so maybe I haven’t really broken in.  But because I’d published several hardboiled novels, a couple of which got a bit of review luv, that got me some attention from some editors in the comics biz.  But I still had to learn how to write a comic book script – which is not like a film script, and I’ve written a few of those too, trying to hustle this or that movie idea.  Comics is writing these static sequences yet always advancing the story.

JMH: What is the first comic you remember reading?

GARY: Not entirely sure, though it might have been a Daredevil or a Fantastic Four. But I can assure you back in the day, in my neighborhood, you didn’t read a DC comic book.  Back then, before Watchmen, the Dark Knight and all that, you were a punk if you read DC.  Marvel had a black superhero (the Black Panther), Marvel’s characters had everyday problems with girls and bullies at school and their jobs like you and your folks did.

JMH: Do you read any of the new comic books that are being published today?

GARY: Why yes, I do keep up with what you young folks are doing these days.  Every week I’m down at my local comics shop, Comics Ink in Culver City, prowling the shelves for my titles;  from Sex and Sex Criminals, Special Exits, the Spider and Doc Savage revivals at Dynamite, Doc Ock inhabiting Spidey’s body hanging around with the black Avengers and so on.

JMH: Print versus Digital. Your thoughts?

GARY: Just as in the book business, the genie is out of the bottle and the ebook format is here to stay.  Particularly in comics where you can do the limited motion stuff, blowing up each panel, voiceovers and sound effects, how can you beat those bells and whistles? But we know are brains are hardwired for stories, I suppose we seek some sort of order in a chaotic world.  So how ever I can tell a storey be it in print, audio, sign language (not like homeboy messing up at Mandela’s funeral mind you), I’m game.  But don’t get me wrong, there’s a reason my shelves much to my wife’s consternation, are overflowing with paperbacks, hardbacks, comic boiok boxes, and graphic novels.  Print is alive and musty in our house.

JMH: Writer’s block. How do you get around that creature?

GARY: I put up juju’s and charms and make the sign of the cross as I burn incense.  Seriously, when I get stuck I’ll stop.  I’ll go to the gym, do some yard work, even clean up my home office.  Just want to let the ideas percolate and fulminate below the surface as I do a task you can do by rote.  This doesn’t always work but it eases the frustration of just sitting there staring at the monitor screen.

JMH: Tell us about your current project...

GARY: My current project is a revival of a ‘40s comics character called Lady Satan.  Initially she was a masked woman with no powers per se but sought vengeance for her fiancé killed by the Nazis.  Then somehow in her third outing, she was reborn as a sorceress in a red gown and matching domino mask who battled supernatural foes.

In the version I’ve re-conceived for Emerald Star Comics, I’ve retained some of the supernatural elements though she packs twin Berettas to dispense nine millimeter justice in the modern day.  She’s a woman with a shady past, including being a stripper, who in the first issue run afoul of a smarmy gangster.  She’s shot in the head and dumped in the ocean in a barrel of toxic residue during a storm – then it’s struck by a bolt of lightning.

JMH: Do you research your story ideas? If so, how?

GARY: Well I enjoy watching the news, news programs, faux news programs (The Daily Show and Colbert Report…Fox News…heh) and read articles on various topics in magazines such as The New Yorker, The Nation, The Atlantic and so on.  Current events are of interest to me and you can’t beat out never-ending greed and duplicity as material or springboards for the stuff I write.

For factual matters I don’t rely on the internet but try to talk to someone in that field or read an authoritative book.  Be it about forensics, money laundering or dog fighting say – and I shall not incriminate myself here.  But suffice it to say nothing beats talking to a person or persons in the field you want to know about.  The facts can be gleaned on certain sites but it’s their stories about being on the job, the little anecdotes and asides you want to hear that will grind your work in the verisimilitude you want.

GARY: Deadlines.  I work best if there’s an extant deadline and I do my best to meet it.  Did I also mention money?  Getting paid for completing the work is a lovely incentive as well.

JMH: Do your stories carry a message?

GARY: Oh, some of my stories may have a message but I do my best not to hit the reader over the head with that.  My first novel, Violent Spring, some twenty years ago was set in the aftermath of the 1992 riots here in Los Angeles.  Consciously my private eye Ivan Monk had to navigate the physical and socio-political-racial landscape of that still smoldering city.  This was an area I knew as I was working for a nonprofit started as a response to the riots to better race relations through community organizing and policy work.

In Lady Satan, there’s some corporate machinations she uncovers after returning from the dead, doings “ripped from the headlines” as they say in our post economic meltdown times.  But that’s woven into a tale of a tough flawed broad who kicks ass as she looks to balance the scales.  I want to entertain, keep things moving, not have my characters stand around on soap boxes lecturing you.  Sure some of the real world leaks into the telling, but comics should be fun, dammit!

GARY: Good question.  I enjoy both forms as well as writing radio scripts and screenplays.  I also write a semi-weekly column for a community newspaper.  Each requires a different discipline, a different way of thinking about making pictures with words --  communicating that to the reader, the artist, the director, whomever.  I want to translate the image I have in my head to this other person who in turn is part of the effort to captivate the reader be it for ten minutes, two hours or even longer.

JMH: What future projects are in the works?

GARY: On one of them I can’t say as I don’t want to jinx it, but it’s set in the ‘80s in a Times Square area when it wasn’t all safe and family-friendly as it is today. I can say though another project which I’m quite happy is happening involves Nate Hollis, this other PI character of mine.  He first saw life in a mini-series from DC/Vertigo comics a few years back.  Then Moonstone collected the mini-series as one and I wrote two original prose short stories fir that edition.

Now Pro Se Press, a dynamite indie press in the new pulp arena, is bringing out Hollis wherein your truly and four other writers tackle interpretations of the character and others in his world, like the half black, half Vietnamese bounty hunter Irma Deuce and his grandpa, the ex-pro football star Obadiah “Clutch” Hollis.  That’ll be out late summer.

JMH: Where can fans get a hold of your books?

GARY: Visit your independent or even chain bookstore.  You’ll find my prose works there like Warlord of Willow Ridge or my story in the heroin Chronicles.  And though it’s not in comics shops, though available in hardcover through Amazon, I have out now a graphic novel funded through Kickstarter I think combines story and message.  It’s called Big Water and is a fast-paced tale about the battle for water rights and some funky shenanigans set in a ‘burb modeled on the City of Bell, which was in the news not too long ago for it’s unbelievable levels of corruption.

GARY: Through the magic of my website, www.gdphillips.com.  There’s contact info listed there.  Thanks for asking, John.

JMH: Anything else you'd like to mention that we haven't covered yet?

GARY: A quick, shameless and blatant self-promotion to let folks know I’ve got two e-book novellas out now and in particular, as this past February was the 81st anniversary when Doc Savage magazine premiered in 1933, Inspired by those larger-than-life characters and stories, I introduce Ned “Noc” Brenner in The Anti-Gravity Steal.

Noc is a drifter gifted at whatever he attempts; from MMA fighter, motocross rider to blitz chess master. Several pulse pounding events start the story and soon he finds himself teamed with a man of a thousand faces, an enigmatic woman with black ops trained esper powers, and a professor haunted by tragedy loosing himself in creating gadgets.  Noc, who has a few dark secrets of his own, and his new allies are out to prevent super villain Prospero from unleashing an anti-gravity device, a machine that would imperil millions.

JMH: Gary, CBI appreciates your time. ALL the best!

John can be reached at: redleafcomics@mail.com