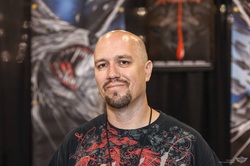 Artist Jesse Hurley’s Angelwolf carries elements of Underworld and Resident Evil within its pages. Jesse recently sat down with CBI publisher John Michael Helmer to discuss his current projects and his career in comics…

JESS: I was born in Denver, CO but was raised in Phoenix, AZ.

JESS: I currently work in IT but would like to make comic creation a much bigger part of my life. I have an amazingly supportive girlfriend and an autistic 13 year old son. I have only worked 4 different jobs in 20 years. Two of them for 10 years or longer. My first attempt at doing a comic was back in 2007 but the pages were stolen out of my car while doing a movie. I was so frustrated it took a long time to stir the passion up again. I also learned to scan my work as I go that day. I have also written over 500 poems most of which I hope to convert into comic form someday because it's not your typical flowers in the meadow stuff.

JESS: I have been drawing comics for 3 years now in the sense that I had a goal and wanted to finish a book. As far as sequence panels however I have been messing around with different ideas since the 90's but never really got anything solid down.

JESS: I think I am more in the process of breaking into the industry. One thing about living in Phoenix is this place is loaded with talent and indy creators more than willing to give advice, point out areas you need to improve in all different kinds of things. We also have some amazing local shops that are more than willing to carry your stuff, great local CONS and events. Having said all that getting out there and being in the public eye is something I need to get better at.

JESS: I graduated at the top of my class from Metro Tech in the 90's in Advertising Design, but it's a much different world now. I also took Art Institute courses when I was in high school but never finished.

JESS: I am kind of all over the place. My comic is done in one style but the ones I have planned will take a completely different artistic direction. If I had to pick an influence I would have to say David Finch and Derek Riggs. Finch for comics but Riggs because I don't remember very many days where I wasn't drawing Eddie doing something in high school. No one in my family was artistic so trying to be understood in that way was pretty difficult early on.

JESS: This is a great question. I will say I probably do much better when I am listening too much and not playing something in the background like a movie etc.

JMH: What types of technology do you use to draw?

JESS: I wouldn't recommend this, but I use a really old graphics program called COREL 8 and I hand ink everything right now using black magic ink. I also color in COREL 8 after my artwork is scanned. I will likely get a tablet soon and move up to another version of COREL just because I am so familiar with the formatting. I am also color blind, so being able to use color pallets keeps me from getting to far off in my consistency.

JESS: It was the 1985 issue of HEX. It came out the same year JONAH HEX was first cancelled. HEX was a sort of Mad Max-ish comic and it was pretty great. I got into ALPHA FLIGHT shortly after that.

I read a lot of stuff now, EARTH 2, VALHALLA CINDERMANE, URSA MINOR, BUBBLE GUN, SPIDER, GHOSTBUSTERS etc. I have tried to keep up as much as possible.

JESS: Print. I did decently a few years ago when I first put my comic out digitally, but the sales have turned around and now I am doing much better with print. Personally working in IT digital formats will always change and that makes collecting almost impossible unless you want to keep a certain computer or ipad around forever. I just don't see that happening. When you've got physically copies you have nostalgia and a way to look back. I know print has faded a bit, but in the next 5 years or so people will realize they don't have the physical library you can always rely on.

JESS: The last 2 covers came out of my head. I really try not to use a source outside of the comic itself. I also try hard to make the inside just as good as the cover. I know covers sell, but if you have great art and great story telling throughout it pays off huge. I can say I think each issue of Angelwolf has improved over the last.

JESS: I've done more airbrush than anything, mostly roses and cars for commissions. I also have done a lot of smaller pencil pieces mostly still life for friends. I have also done a few CD covers and metal band artwork.

JMH: What project are you currently working on at now?

JESS: ANGELWOLF Issue 3 is probably 3 weeks from being done. The comic is about 7 people spared from death after being attacked by werewolves.

JMH: What future projects do you have in the works?

JESS: I have one I will be starting in July called DARK 30. It will be 3 stories in one issue all drawn by different artists. I will be doing the first story which will be a huge departure from anything I've done before.

Don't give up and if you are happy with it someone else is bound to be. As long as you are pressing yourself to get better you will. Also don't take criticism to hard. Take what is true out of the criticism and strive to make your art better.

JMH: Jess, CBI appreciates your time. All the best.

JESS: Thanks anytime. We think we got a comic anyone that likes Underworld, Resident Evil or even Van Helsing would love but there is a lot of focus on storytelling and giving you deep characters as well.