CBI: Can you describe the world/universe it’s from?
JP: In this story, the helicopters are a part of a top secret military operation located in Area 51, called Strike Force X.  Their mission is to investigate paranormal, especially extraterrestrial, activity which may threaten national security.  They also develop and test advanced weapon systems and aircraft.


The Strike Force is well aware and has thoroughly accepted paranormal phenomena as fact, and that much of it is connected.  There is an alien conspiracy at work that may change the world as we know it.  Right now, it is underground, covert.  In time, it will erupt into a full scale world war.  Only a handful know the real truth of the danger.  Some feel it's already too late.  Some have gone over to the other side.  Some, like the Strike Force, are pledged to fight the conspiracy at all costs.


The helicopter itself in this story is a super advanced craft combining human and alien technology.  It can transform into different configurations or modes for various tasks.  It has an array of exotic weaponry and flies at hypersonic speeds.  A most deadly instrument of destruction.

We will meet other Strike Force teams and officials of the organization. Also making appearances will be the human/alien hybrids called the H-Men.  The story will also feature the motivations of the invading alien race.The craft is manned by a squad of highly trained specialists called Strike Team One.  The team consists of:


Ace Brannigan - Pilot of the helicopter.  Good friend of Matrix.  Colleague of many campaigns with him.


Lug - A living crash test dummy.  He gained a kind of "life" during an experiment with a space capsule.  He possesses great strength, high durability, and greater than human intelligence.


CBI: Was The Black Helicopter inspired by anything from your past or real life experiences?
JP: In 1947, the Roswell UFO crash occurred.  The saucer craft was taken to Area 51 where the best scientific minds of the free world began a reverse engineering program.  It opened up a new technology called Symbionics, a kind of amalgam of the organic and the cybernetic. From this technology came the Black Helicopters and other amazing mecha.


CBI: Any influences to your writing or creating style?
JP: As to my influences, I read a lot of paranormal material and thought the Black Helicopter might make a good story.  The influence in my life have been the paranormal material I have absorbed. I noticed that no one had really addressed the Black Helicopter questions.  Who are they? Where do they come from?  What is their purpose?  Are they friend or foe?  These are the questions that I'm going to answer, and try to tell a good adventure yarn.


CBI: Do your stories carry a message for the readers?
JP: Well, I don't have a message per se, except to say "The truth is out there!"  There are many mysteries in the world.  This story will incorporate many of the strange phenomena and conspiracies that abound.  Everything from Atlantis to zombies, from Bigfoot to UFOs, will be explored.  If there is a message, it's that sometimes there is more to a story than meets the eye.  Be careful what you accept as truth.  Especially in this age of the Internet.  Be circumspect.  Question everything. What is their purpose?  Where do they come from?  Are they working for the good of mankind, or are they enemies?  These are questions that I'm going to answer, and try to tell a good adventure yarn.


CBI: You mentioned that The Black Helicopter is a mix of human and alien technology. Is there a super scientist or a group of scientists that created the hybrid? Can you tell us how it was constructed?
JP: There are many secrets to the Black Helicopter and they will be revealed one layer at a time. Sorry, but you have to check out the series for that secret!


CBI: Lug – is described as “A living crash test dummy.”  Is he alive? Elaborate on his origin for the readers…
JP: Lug was one of a group of sophisticated Air Force crash test dummies that were sent into space in a capsule to encounter a high energy field that was passing through Earth's atmosphere.  The radiation had a strange effect on the dummies' polymers and sens-o-meters and actually imbued them with a kind of life.  Lug is totally sentient, with an actual higher state of intelligence than human.


CBI: What kind of technology will we see on the helicopter? Describe some of its amazing gadgets.
JP: The Black Helicopter is capable of transforming into different functional shapes or modes.  One such configuration is the Mandroid, or humanoid mode, where the copter can walk like a human.  Another is the Mole mode, where the copter can tunnel underground, or the Sub-sea mode, for traveling underwater. In addition to its gun turrets and rockets, the copter can also shoot a powerful laser from its forward cannon which can stun or kill.


CBI: Are there superheroes in the Black Helicopter universe?
JP: There are superheroes, but not in the conventional sense.  There will not be caped spandex clad people flying through the air.  There will be characters with superhuman abilities both good and bad.


CBI: What is in store for the Black Helicopter in the future?
The Black Helicopter and its organization face a turbulent future.  Paranormal activity, extraterrestrial encounters and conspiratorial incidents will all seem to be heading for an apocalyptic ending. The secret wars will be public.  Mysteries will be revealed.  Sides will line up for the final battles.  The fate of the world hangs in the balance.

The future of the Black Helicopter will be a challenging, exciting and dangerous one.


CBI: John, Comic Book Interviews appreciates your time.
JP: Thank you for giving me a forum to talk about The Black Helicopter! 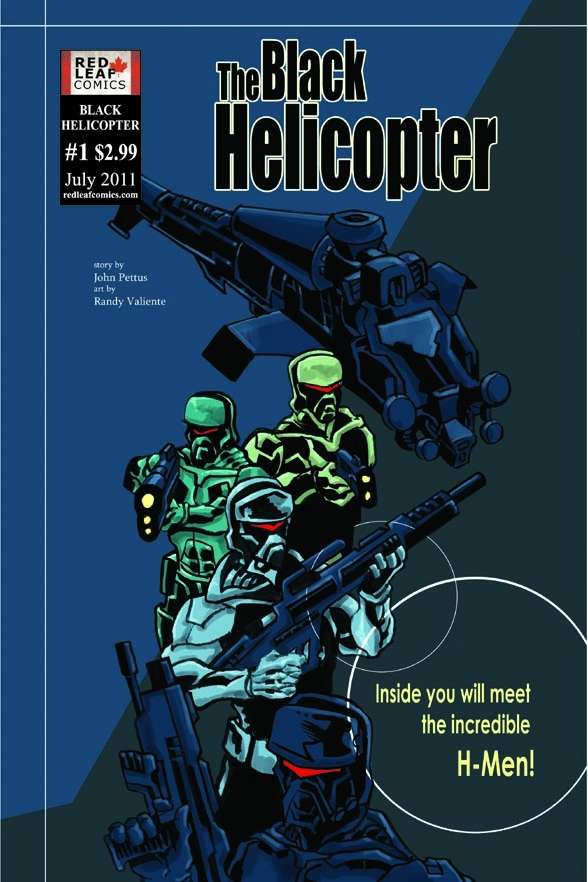