JMH: How long have you been writing comics?
​JAG: If you mean professionally my first published work was released in 1990. It was a one-issue digest titled "Captain Sentinel and the Lads of Liberty Special" and was published by ABYSS COMICS.


JMH: Have you written other comics companies' characters or only your own properties?
JAG: I have written a ten-page Luxura story titled "Ode to an Unsung Warrior" that appeared in "Legends of Luxura" #3, I've adapted the poem "The Main-Truck: Or a Leap for Life" which was published in the one-shot "Poet's Prosper" under Caliber's TOME PRESS imprint, I have written dialogue for some sci-fi pieces that were plotted and drawn by Seppo Makinen and I am currently working on a two-issue story for STARVERSE COMICS where Lloyd Smith's and my Destiny teams up with Ryan Crouse's Techstorm.

I have also written an Aetos The Eagle story for Dan Parsons' ORPHAN UNDERGROUND COMICS (that I was paid for but never saw print), I was under contract with Kris Silver's GREATER MERCURY COMICS to write Legion X-1 (but the company folded before any of the stories I wrote saw print) and I worked on a spin-off series of OASIS COMICS' Future Beat (but again; the company went out of business before anything went to print).


JMH: What is Red Lion? What is the company's focus?
JAG: Red Lion Publications is the comics publishing arm of my multimedia firm Seajay Ventures. I am the publisher, and former BLUE MOON COMICS GROUP publisher Lloyd Smith is the editorial director. As well as publishing new material of my own we are planning to publish Lloyd’s Kragor and Steve Skeates' Stateside Mouse. If all goes according to plan our first issue will be released in the first part of 2011.Our website can be found at: www.redlionpublications.blogspot.com.


JMH: What can you tell us about your signature character(s)?
JAG: I never really thought of myself as having a "signature character". Some of my more popular characters though include Solomon Wyrd, The Young Immortals, Captain Sentinel and the Lads of Liberty and Mister Chameleon (www.misterchameleon.blogspot.com).


JMH: What other mediums have you written in?
JAG: I started off writing for my high school newspaper in the early 1970s and then after I graduated in 1974 I worked for a fanzine published in my home town of London Ontario called "Media 5". I then started college in 1976 where I worked for the college newspaper which was, actually, my first paying job.

After college I moved on to a technical school and got a diploma in radio and television broadcasting. While at that school I worked at its radio station as a DJ, reporter and eventually its news director. Once I graduated from there I worked in television for a short time and then returned to the print medium in 1982. Since then I have written for magazines, fanzines, newspapers and websites. I have been the communications director for the London Ontario branch of the Consumers Association of Canada, the North American editor for a German science fiction magazine called "The Watcher" and I have written columns for Mad Scientist magazine, London Ontario's Scene magazine, Science Fiction Darkside and The People's Comic Book Newsletter (plus for a few websites, too). Starting in 2004 I wrote a newspaper column for two and a half years for The Middlesex Banner and I have been a newspaper reporter for The Middlesex Banner, Lake Erie Beacon and Elgin Banner. I've had articles published in a variety of publications including Science Fiction Darkside, Writer's Journal, Canadian Writer's Journal, The London Free Press, Side Trekked fanzine and The Mighty Crusaders Super site (www.mightycrusaders.net/thegroovyage.html).

Finally I've also worked as a researcher for a Canadian export consultation website. That's all that comes to mind at the moment. Oh, I periodically write a blog titled E-Dispatches from the Great White North which can be found at www.dispatchesfromthegreatwhitenorth.blogspot.com.


JMH: Tell CBI about yourself.
JAG: My full name is Jonathan Allan Gilbert and I was born in London, Ontario Canada in 1956. I am an only child and both my parents are deceased. As well as being a writer I have been active in politics in some way, shape or form since the early 1970s. My friends consider me to be a bit of a socialist while I prefer the term "Trudeauite Liberal". My other interests include history, mythology, theology, astronomy, archeology, comics, and pulp magazine history. I have a deteriorating condition known as peripheral neuropathy (www.neuropathy.org) that has limited my creative output over the past few years but I keep on working at stuff as best I can.

JMH: What unique story telling can you bring to your tales because of your Canadian background?
JAG: I am not sure if my being Canadian has much influence at all to be honest with you. I know writers who are American who have a unique story telling approach-my buddies Steve Skeates and Lloyd Smith immediately come to mind-and I know Canadian writers who, well, suck to be honest with you.

I think what influences a writer more is his or her knowledge of the craft, experience and outside interests among other things. As the Earth is more and more becoming a global village, places of birth are having less meaning. That's not to say it isn't without some influence but not in the same way it did back in the 40s or even the 70s.


JMH: What future projects are in the works?
JAG: Well there's the two-issue tale for STARVERSE COMICS that I mentioned plus a couple of projects for RED LEAF COMICS including a sword and sorcery series (with my friends Stephen Sheepard and David Johnson Jr.) and a story featuring Red Leaf Comic's golden age Canadian hero The Leaf.

I am also getting geared up to launch RED LION PUBLICATIONS. As well as publishing Stateside Mouse and Kragor I plan to release a one-shot 70s mystery style of comic titled "Mystery Adventure Tales" that will feature a revival of a 70s horror muck monster and a tale from English folklore that will be introduced by paranormal investigator Shannon McCabe. I am also developing a super-hero team title for RED LION PUBLICATIONS that will be the flagship title for the Red Lion Superhero Universe. Finally, I have also been asked to write some stories for a pulp magazine that is to be launched in 2011. Not sure what I'll be writing for it as yet but it should be a fun change of pace from comics.


JMH: If you could write another company's character who would it be and why?
JAG: Do I have to pick one? Well, there's Skywald’s Heap for starters. Then there is the whole MLJ/Mighty Comics Group/Red Circle Comics Line. After that there is Kris Silver's SILVERWOLF/GREATER MERCURY COMICS' characters, the golden age Human Torch, the Phantom Stranger, the Justice Society of America set in the 40s, Little Archie, The Challengers of the Unknown, the original Vision, Future Beat, King Kull, Justice Machine, Trekker, The Avengers and the original Ant-Man/Giant-Man. I could go on and on to be honest with you. As for why, well, basically I have a love for the characters and would enjoy working on them. Heck, I'd even love to revive The Inferior Five.

JMH: For someone who wants to be a writer what can you tell them about the craft?
JAG: Well, first I would say don't do it. The pay is terrible and the rewards are minimal and the strain and hassle can send you to an early grave. On top of that it can be a pretty darn lonely job. But if he or she still wants to be a writer after hearing all the negatives here are some tips.

Next: read. And not just comics. Read EVERYTHING.

And finally: have a life outside of writing. Go out, meet people, have friends, enjoy yourself. You'd be amazed how life's experiences will be the best teacher and source of ideas.


​JMH: Jonathan, thank you for your time!
JAG: All  mine, thank you. 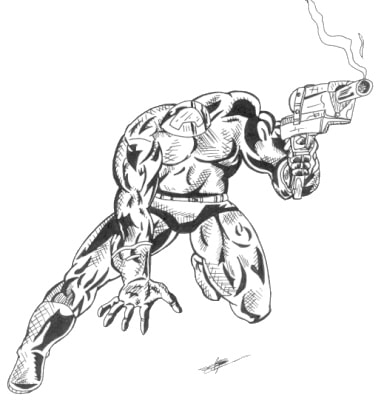