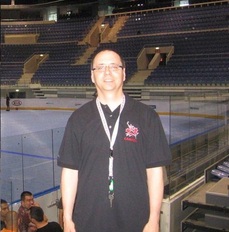 Paul Beale has been writing for a very long time. He, along with Jimmy Hachey, were two guys I looked up to during the Saint John fanzine craze that I was swept up into. Paul was producing so much stuff, and so fast. He's just brimming with stories, and now he has Red Leaf Comics as a platform to get his tales out to the masses...

HAL: Where were you born and raised?

HAL: How long have you been writing?

PAUL: Well I have had stories in my head since I was about 10 but I started putting them shortly after at around 11. Very poor stuff at first.

HAL: Much like fellow creator Jimmy Hachey, you were both heavily involved in the Saint John fanzine scene of the 80's and 90's. Tell us about it?

PAUL: I was really lucky that I was kind of discovered by Jim. He took me under his wing and showed me the ropes. We were doing almost an issue a month of his book “Destructors of evil “. There was about five of us at first and we all did everything but over time we gravitated to what we did best. For me it was writing. There were other books and in time I had my own book, “Third Wave” so named because most of its creators were part of a third wave of Maritime talent. It was the best place to learn about how comics were produced because everyone was really trying to put out great stuff and we learned from each other.

HAL: Tell our readers about what you're working on?

PAUL: Wow, there is a loaded question. How long have you got. I write VERY fast so I usually have lots on the go. I have been working on a Sci Fi story called “Warfin” My world war two/ pulp hero Commander North, A jungle/survival series called the Hidden Island” and a super hero story about my long term group “Megga”. All are for “All Canadian Comics”which I edit for “Red Leaf Comics”. Outside of my comic book work I am writing a short story for the online Sci Fi magazine “Sci Fi Max”

HAL: Are there any other titles you are working on? Are they limited or ongoing?

PAUL: Almost all of my work is ongoing in some way. I have 100 worlds in my head and I’m eager to get them all out but it takes time and the right people to work with. I am blessed to have a great team working with me at ‘’All Canadian Comics”. You will see most of my stories written in a way that they stand alone but can be continued. They may not be continued in the following issue but perhaps the one after that. I will also have a Christian comic with “Red Leaf “coming out this year. It does not have an official title yet. There are not really any Christian comics out there right now but they were fairly common at one time.

HAL: Who are your writing influences?

PAUL: Steve Englehart, Marv Wolfman, Bill Mantlo, Gay Lord DuBois, Russ Manning, Chuck Dixon, Joe Gill, Tom Defalco, Gail Simone, John Byrne, Al Hartley and Ron Fortier who I had the pleasure of meeting back in my fanzine days. He was an influence on me at first due to his “Green Hornet” series for now and a friend knowing this introduced us at a comic book store in Saint John when Ron was on vacation. There are many more. I could just go on for days as I read just about every type of comic

HAL: How do you focus when writing? Do you ever suffer from writer's block, and if so, how to you deal with it?

PAUL: Writers block, what is that? Seriously I have been fortunate to never experience that and the only thing that slows me down is when I need more artist/inkers and letterers or when I am forced to go to work to live. Not that I don’t love my job but I would rather be writing.

HAL: What was the first comic book you ever read?

PAUL: Well we are going back a bit here but the first that I can remember sticking in my head was a Captain America and Falcon #136 where they are battling the Mole Man. I know I had comic books before this but this is the first one I remember and it’s the one that really got me into comics in a big way. I was reading Cap and Batman books at this time and for a little while before. I use the word read loosely as I was not a great reader yet but thanks to comics my reading skills improved very fast.

HAL: Do you read any of the new comic books that are being published today? If so, which ones?

PAUL: I really think the last three or four years have been the best since the seventies. I read Batgirl, Nightwing, The Shadow, Doc Savage and many more but I still hit the back issue boxes for some old stuff too.

HAL: Name a few characters or franchises that you'd love to write for if given the opportunity?

Paul: Well I am trying to get into a new book called Charlton Arrow which sells via mail order from its facebook page. It has a lot of great pros and a few new comers who are bringing back great Charlton characters. I really want to do “Freddy”, Charlton’s teen character. I have a submission in so who knows. Along with that I really like a lot of the stuff Dynamite entertainment is doing with the old pulp heroes so that would be cool.

HAL: Name a few fellow creators that you would love to work with?

PAUL: Richard Comely would be cool because as a Canadian he was my inspiration to believe a Canadian could do this. Anyone on my list above and in terms of artist well the list is TOO long but Speigle, Buscema, Buckner, Perez and so many others. I would say Russ Manning but to my knowledge he is not still with us.

HAL: Do you write for any other mediums? Would you?

PAUL: I am writing for an online Sci Fi magazine called Sci Fi Max because I really loved their first issue. It’s a survival story centered around several tsunamis hitting the east coast of Canada and the US. I would like to make this a novel when the time is right.

HAL: Print vs. Digital. Your thoughts....

PAUL: Both but I prefer to have a print copy because I often read in bed before going to sleep. I just find it easier to gets lost in a story that way.

HAL: Finally, who wins the Stanley Cup this year?

PAUL: Well this will surprise a few people but I’m a Bruins fan. Boston is the closest major city to where I live and we have our share of Bruins fans around here. They are first in the league and should contend for lord Stanley’s cup again this year.

HAL: I think your big bad Bruins may indeed be the team to beat in the east. I'd love to see them and Montreal meet in one of the rounds. Anyhow, thanks for doing this Paul, and if I can ever make it over to SJ, we'll have to join up with Jimmy and the bunch of us go out for lunch, and I'll even let you pay... :) 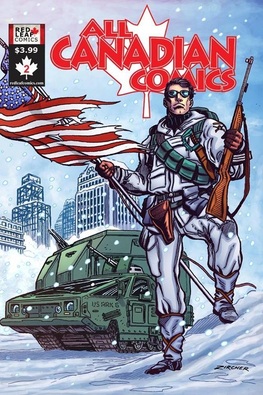 Hal Hilden fancies himself a warrior-writer. Having wallowed through the trenches with pen and paper in hand he has fired off script after script over the years. This has given him calloused fingertips and the intestinal fortitude to realize that working in the comic industry is easier said than done.

Hal’s co-creator owned property is Dreamland: 2047. He dabbled in the television industry writing a spec-script for a cartoon property. Hal is currently a staff writer for Red Leaf Comics and Chief Correspondent-Canada for comicbookinterviews.com. His highly-acclaimed issue: MacSorly, RCMP from Red Leaf Comics was an instant hit.

Hal can be reached at: halhilden@eastlink.ca
Powered by