CBI: Tell the readers about the origin of Nexus. What inspired the character when Nexus was created?​

STEVE: The Origin of Nexus began with an idea.  The idea came from two people who loved comics, (Mike Baron, 29, and Steve Rude, 22)  and wanted to become known in the field.  They got together in 1979 and it grew from there. That’s how all things happen.  For those who think it happens without digging in hard and sitting on your couch, you know you’ve been listening to the wrong entities. People from my time period hear this all the time about kids in the teens up until their 30’s. If that’s true, you cannot afford to be one of those people. Grab it and go for it. That’s what you have a life for.


CBI: What makes Nexus such an endearing character for you and fans?

STEVE: First of all, does anyone really know the answers to questions like that? Doubtful.  However, there is some good advice on creating something that most of you already know. That is, if you’re looking on the outside for something superficial based on trends or current popularity, this is the cheap, 90% route people do when they just want short-term profit. Go to the inside, into yourself, and find what you’d really like to do with a character, you’ve just upped your chances considerably. You may not get rich, but is that really what this is all about?  Creating it according to some popularity poll or audience testing group is the perfect way to create misery for yourself. The only people doing that are those who have been hired by marketing groups and fired just as quickly. Is that really any way to live?


CBI: There are a lot of platforms to publish comics, from self-publishing to small and large publishers, why did you choose Kickstarter?

STEVE: Over the years we’ve tried different platforms and Kickstarter has been our most successful. This will be our 10th project with Kickstarter.


CBI: Is Mike Baron involved in any way with this project? Do you both communicate about the character, plan, or plot future stories for Nexus?

STEVE: While working on the second Nexus oversized edition of new material, The Battle for Thuneworld, I sent Baron a timeline for our main characters so he could inspect it. But as of now, we’re both doing separate version of our beloved Nexus character. It’s probably a good thing for us to stretch out like this after 35 years of being partners. I have the highest regard for Mike and his forward drive as a writer.  Few equal him in the outpouring of perpetual ideas he’s always coming up with. New comic ideas, novels, short stories, long stories, you name it. It never ceases with him.


CBI: Talk about Nexus: Battle for Thuneworld. What is the story about and what’s in store for Nexus this time around?

STEVE: For me, the author, artist, and everything in between with The Battle for Thuneworld, it would probably charge anybody’s nerves to be creating a book with over 100 pages in it.  I’ve been the artist on Nexus for over 100 issues, but writing is still complete unknown territory to me.  I did try recruiting other top writers to help out.  Didn’t work out.  So I was left with one option--me or the highway.  The first thing I had to do was explain loose ends from the story before it. Two characters, Dave and Fred, were gone for a long time.  I think Baron just forgot about them.  So I had to figure out, where did they go?  And why?  That’s what started it.  A hundred rewrites later, I figured it out.


CBI: Ashcans are an interesting collectible. Why did you choose the ashcan format for this project?

STEVE: We have in the past done ashcan as preview copies to give our most supportive fans a sneak peek into what they will find in the final story. This goes one step further as the comic is still in the process of having the script finalized.  It gives them a true behind the scenes look at the story as it comes together in its roughest form. Beats me why people want to a half-finished book before the real thing comes. All this is mostly Gino’s (Jaynelle’s) doing.


CBI: What are some of the cool rewards and add-ons that fans MUST have in your opinion for this project?

STEVE: The add-ons I’m most excited about are the oversize Nexus Gourmando hardcover, Nexus “SPECTRUM” print, and the Judah T-shirt. We’ve recreated a $1 “Create your own package” for anyone just interested in getting the rewards.

The Nexus SPECTRUM poster is a spectacular image and we’re only charging $100 for this massive, oversized print.  It will be limited to what is ordered plus a few extras to cover any damages.  It’s going to be signed, numbered, and come with a certificate of authenticity.

The Judah T-Shirt is a really cool image and looks incredible on the dark background.

We’ve all read the story of Samson fighting a thousand Philistines.  Imagine that scene in the upcoming The Battle for Thuneworld edition.  One person called it the single greatest scene ever created by me.


CBI: Steve, how can fans pledge/purchase a copy of your new project?

STEVE: Search for “Nexus” on Kickstarter or follow this link!


CBI: Steve, CBI thanks your for your time and ALL the best on the new Kickstarter!

Nexus: Into the Past 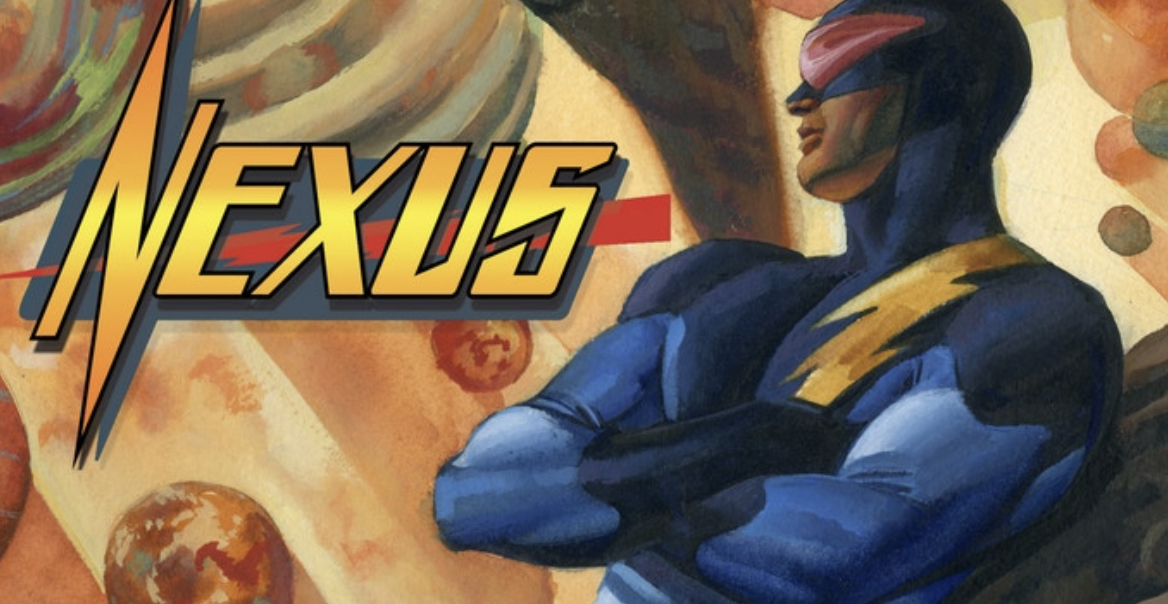