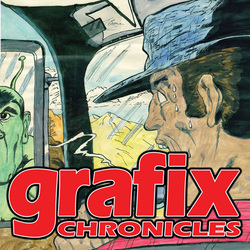 
JMH: What is Grafix Chronicles?

TWM: Grafix Chronicles is an ongoing anthology that for a few issues will mostly feature reprint stories from friends of mine or pages that I worked on as inker or letterer. Later on there will be original stories, mostly full 22 page single stories, and some shorts, but all sci-fi/superhero related. Hopefully I can do a color issue. As with Monty’s World I want to keep things fun and old school.

JMH: What is the books origins? The name as well?

TWM: As I was coming to the end of Monty's World, I noticed that there were other short stories that I wanted to published, so I came up with GC. Although I’m not a big fan of anthologies, I have worked on lots of short stories. Plus, it’s a great way to introduce a character.

JMH: Does Grafix Chronicles have a set line-up?

JMH: Are the stories from Grafix Chronicles original or reprints?

TWM: A little of both.

JMH: Do the stories carry a message to the readers?

TWM: That depends on the reader. They are what you make it. I do not plan to preach, just have fun.

JMH: Talk about the creative team involved with Grafix Chronicles.

TWM: Since this is an anthology, all of the stories will have various creators. I do hope to have some of the creators that I have worked with contribute stories like Mark F. Davis, Ron Fortier, Ron Stewart, John Helmer, Darren Davis, Paul Moore, etc. Whether they are reprints or originals.

JMH: Can creators and artists submit stories for the title?

TWM: At this point in time, no. Maybe later on as the titles grows and I have more free time. But then again, I do change my mind quickly. I plan to release books when I have enough stories. Not trying to do monthly or bimonthly. I tried that worth Monty’s World and it took over a year to release the 4 issue mini-series

JMH: Will Grafix Chronicles be released in digital format, web comic, or print?

TWM: Print and digital as always at Comixology, DriveThru Comics, Graphicly and print at Indy Planet. Plus, print version is available locally in Portland, OR at Bridge City Comics. Hopefully I time goes on there will be more local stores as well as national thru Diamond.

JMH: Where can fans get a hold of Grafix Chronicles.

JMH: Finally, is there anything coming up in further Grafix Chronicles stories, or other projects you want people to know about?

TWM: Now that Monty's World is complete, a few of the characters will have a mini-series or one-shot releases this year: C.J. Walker, Bounty Hunter, John Kirby: Firefox, Lightning Marval and a character created by Mark F. Davis' American Guard, Dartman created and written by Richard D. Irving. Plus other surprises.

JMH: Warren, CBI appreciates your time. All the best!